What is the CASPer Test

The CASPer test is a situational judgement test, run online. It stands for Computer-based Assessment for Sampling Personal characteristics. It was initially designed to screen applicants to a US medical school, and has since been used by various academic programs – not just for Medicine. Each scenario in the CASPer is presented as a paragraph of text, or a short video. There are then three questions that you must answer on each scenario, with a total of five minutes to answer all three questions.

How long is the CASPer test?

The entire CASPer test is 15 scenarios, and the entire test takes around 100 to 120 minutes. There are two sections. The first features 3 text based scenarios and 9 video scenarios, and you must respond to three questions on each. You have five minutes in total to answer the three questions. The second section requires that you video your answers, using your webcam. There are 2 text based scenarios and four video based, and each again features three questions. You will have 1 minute to record your answer to each question.

When can I sit the CASPer? How much does it cost?
You can sit the Casper on a range of dates throughout the year. There are between 25-30 sittings per year, with the majority being from May to September – there are around 20 sittings from May – September and up to 10 from October through to April. You should note that different medical schools will have different ‘distribution deadlines.’ The distribution deadline is the last time that the school can be added to your CASPer distribution list. The CASPer costs only 10 USD to sit, although you must pay an additional 10 USD to distribute your score to your chosen schools.

What is the CASPer used for?

The CASPer was first developed as an online version of an MMI – a test designed to make sure that potential doctors had the right personal attributes to succeed, and to make their patients feel comfortable. The test therefore assesses ethics, empathy, team working ability, professionalism, ability to communicate with others, conflict resolution, problem solving, ability to judge a situation, and awareness of diversity and cultural issues. You should be able to make decisions under stress, and communicate easily with people from a range of backgrounds and of varying degrees of authority and knowledge.

When sitting the CASPer, you should bear this in mind. Your ability to work as a compassionate doctor, who communicates well and effectively with their patients, and does the ‘right thing’ – or at least does their informed and rational best to do so – is what is being examined here.

How is the CASPer scored?

The test is scored by a range of reviewers, who may be doctors, medical students, or members of the lay public. They will have undergone a training program to prepare them to score the tests. They are trained to be as objective in their assessment of given criteria as possible. Each CASPer response is graded using a scale from 1 to 9, with 1 being an unsatisfactory response and 9 being a superb response. All three responses to a given prompt are graded by the same scorer, with the score you receive being an average of your ability over the three questions. Each individual section (of three prompts) will be scored by a different marker, meaning that you should have 12 different markers over the course of the entire test. Each marker is given a series of candidate responses to individual scenarios, meaning that their marking should be uniform throughout – meaning that the marking should be as fair as is possible.

Can one fail the CASPer?

No. You cannot fail the CASPer. However, what ‘failing’ means will depend from one person to another, and it is likely that your definition of failing the test would involve a score that was deemed too low to enable you to get into the school of your choice. Therefore, you should be aware of how the test is scored, find any information possible about how much it is used in the admissions processes of schools that you are interested in, and aim for the highest mark possible.

Does the CASPer test record you during the written section?

The CASPer test does record you during the written section, but only for the purposes of ensuring that you are the person writing an answer to every question. You have to stay within view of the webcam throughout, although you may leave the webcam’s field of view during the break in the middle of the test.

How important is the CASPer test?

This will change from school to school – for some it may be used as a main judging tool – meaning that those with the requisite academics will then be screened for interview using the CASPer primarily. For others it may be used as an adjunct, to check that students don’t score very lowly. How important the test is to you will therefore depend on the schools that you choose and their use of the test.

Is the CASPer difficult?

This is a subjective question, but it is normally seen as a tough assessment of soft skills. The questions are not designed to be simple and easily answered, rather to be complex enough that you have to demonstrate an ability to think in a logical way. If you are able to prepare effectively and become used to the question formats, then the test need not be overly stressful. 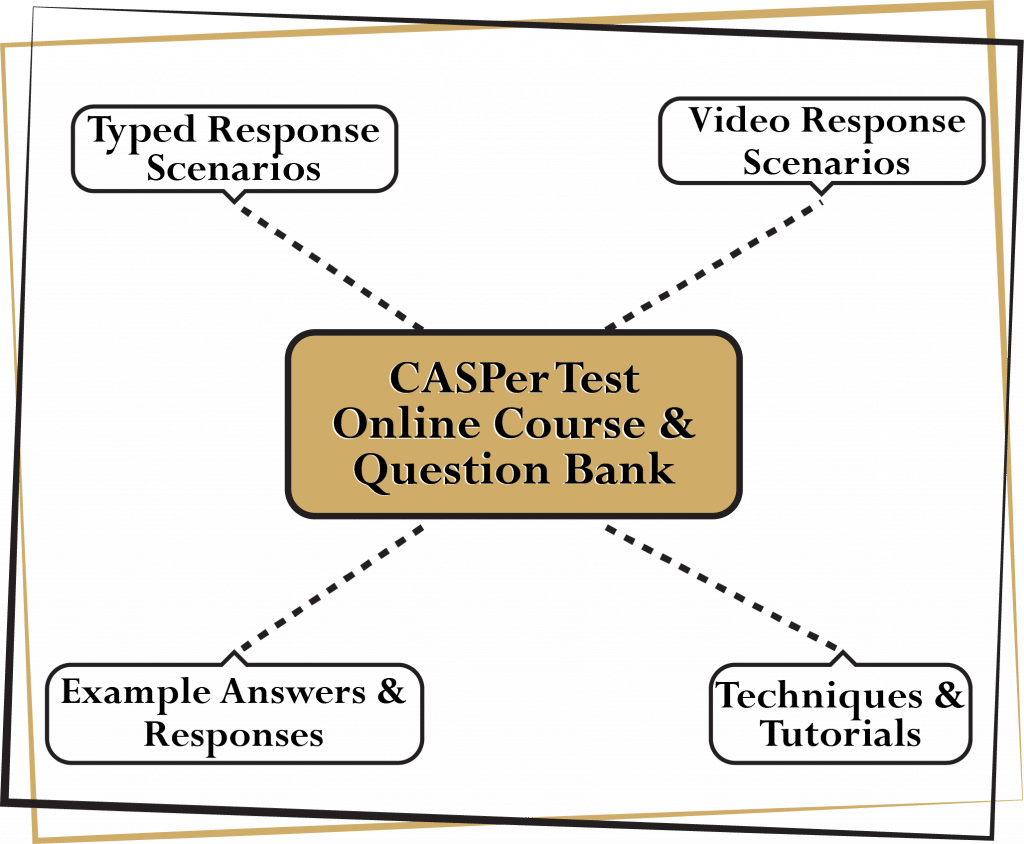 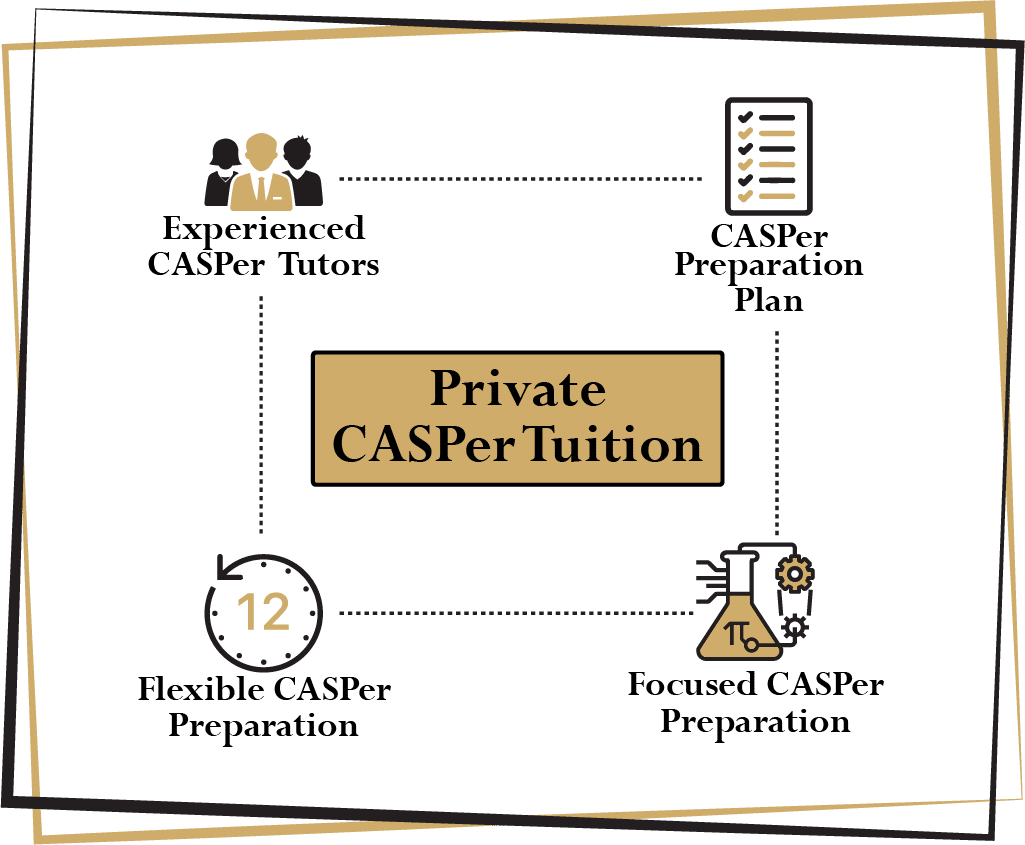 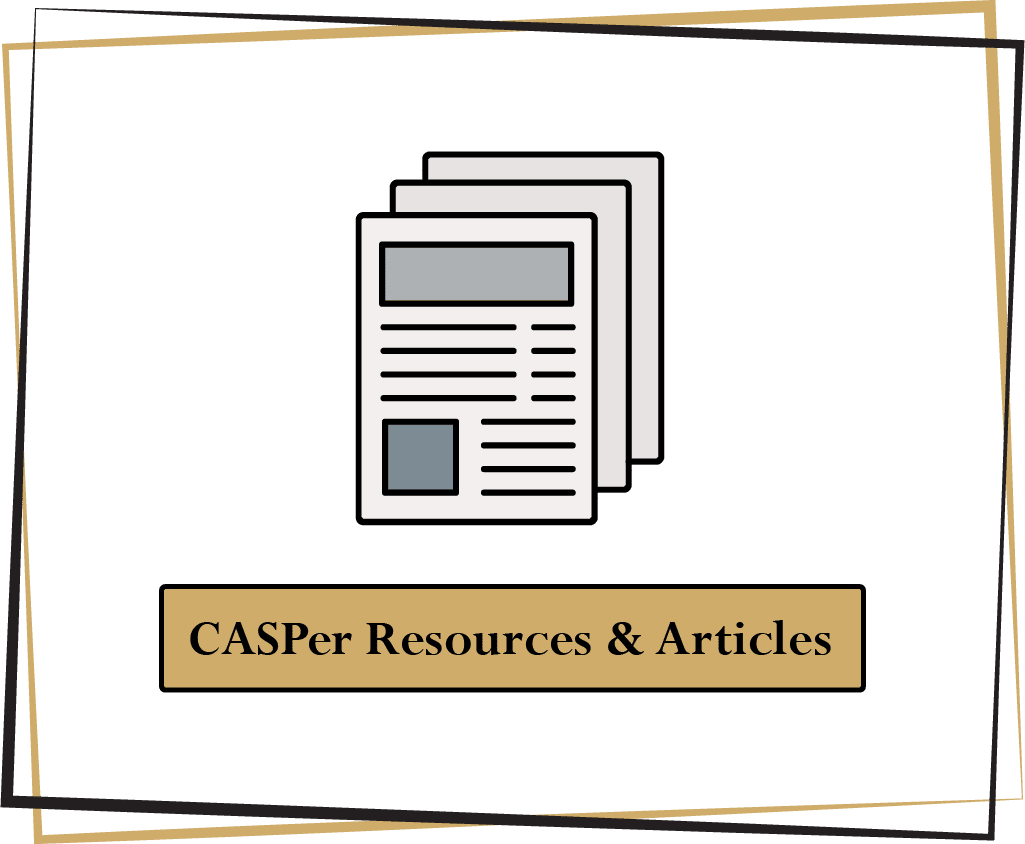 Should I study for the CASPer?

Yes. Whilst the developers of the test claim that it is immune to preparation, research has found that preparation can help. Any aptitude test can be revised for – even an IQ or EQ test can still be prepared for. If you consider two otherwise identical people, one of whom has answered 100 practice questions, and compared their answers for each to a model answer, and then timed themselves throughout multiple practices, versus one who has never researched the test format before, who do you think would do better? You should give yourself the best chance of success, and of taking the exam in your stride.

You should note that you will only get better through practising with the help of model answers, and feedback.

What is a good CASPer score?

Your score will be a huge determinant in the likelihood of your gaining an interview at a medical school. We can look at the example of McMaster University, the first to introduce the CASPer test, that is now a part-owner of the company that administers the test. They explain that the CASPer accounts for a third of the pre-interview score for any applicants. We can also see that of the students admitted, many have below average GPA and MCAT (around 30%) – showing that a competitive CASPer score and a good interview are vital to succeeding in the admissions process. You can contact the admissions department of certain schools that you are interested in to find out more information.

How do I do well in the CASPer exam?

In order to succeed, you must have a clear plan on how to approach both your preparation for the test, and the test itself.

When sitting the test, you should prioritise time management – be aware of how long you have spent on a question and how long you might have left. Always plan your answer first, as a coherent answer will be quicker to write and more likely to succeed than an unplanned and rambling answer.

Always demonstrate professionalism through formal wording, awareness of others and their cultures, and through avoiding any wording or content that could be perceived as politically incorrect.

During video questions, speak clearly and make sure to emphasise core concepts. Don’t rush, and take time to think if needed.

You should give yourself 2 months to prepare for the test, which is enough time to learn the behaviours and attributes that you will be expected to demonstrate. You should begin by thoroughly researching the test, so that you understand exactly what you are preparing for. Then, your preparation should consist of working through practice questions, and consistently checking your answers against model answers or feedback. Only through checking your answers will you be able to progress. You should prepare your own approach to the questions, based on the following approach.

Develop an approach to the questions

This is an outline of how to approach any question type.

Firstly, review the brief to understand the following:

Read all 3 questions before commencing your answers

Troubleshoot Points – The following ideas will help you to create an answer if you find yourself struggling to think of valid points under exam pressure.

Additional Information: Finally, when you are struggling for key points, ask yourself ‘what additional information would help me come to a judgement’. For example, in the case of a ‘friend asking for money’, key factors are likely to be: the amount of money requested, my present financial circumstances, what the friend requires the money for as well as if this is a regular occurrence or unexpected request. Through documenting these factors, the examiners can note your well-reasoned thought processes.